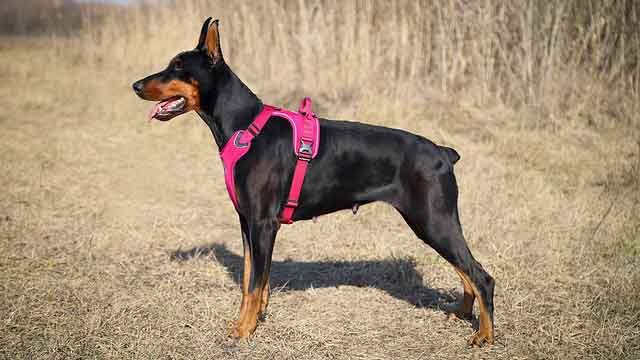 If you look in some of the books, the original Doberman dog looks like a kind of a poor cousin. It’s a lot rougher, and it’s not as smooth and elegant. They cropped and docked them though from the beginning. So, they’ve always had the cropped ears and the docked tail. It was a little smaller, just not as elegant as they are now because there are different breeds that went into the makeup, there’d still be a little bit of a throwback occasionally. So there would be a little of this and a little of that. However, in a very short time, they got them going.

Well, I know there’s much stink from some people, you shouldn’t crop and dock, and it’s wrong. They talk about oh, the dogs should have natural ears. What I say is, a natural ear is an erect ear. You will never see a fox, coyote, wolf, and a dingo with floppy ears. So the floppy ears are a human-made aberration in the first place. Certain breeds with floppy ears like Cockers are notorious for getting ear infections because they don’t have circulation in the ears.

It’s also much easier to read the intentions of an erect ear dog because dogs use a lot of body language. That ear set forward laid back, you know, that tells you what the dog is thinking. So when you have a cute little dog with floppy ears, he doesn’t telegraph his intentions quite as easily. So I will always have cropped ears.

Now in certain areas, especially in the EU, they’ve forbidden cropping and docking. The animal rights people have gotten involved. The biggest problem, as far as the Doberman, is that some of your other breeds don’t dock, for instance, a Rottweiler. They have a very heavy tail, and it’s a lower set tail.

The Doberman pinscher has a high set tail, and it’s very thin and whip-like, like a Greyhound. When you have this high Doberman tail that’s sticking out in the air, and wagging furiously, and it’s a house dog, there’s a lot more chance of injury to the tail. Also, the chances are, you going to hear the vet saying, “We’re going to have to amputate.” Well amputating a tail at a year and a half, it’s part of the spine, there are nerve endings, there’s phantom pain.

When you do a dock a puppy, normally it’s done at three to five/seven days old before the dog has the full nerve costume and the feeling. So they don’t even need to use anesthesia. However, if you do it after about ten days of old, then the nerves are fully developed, and then you would need anesthesia. So, to me, it’s much easier to take it off when they’re a few days old, and avoid any chance of injury because of that high, thin tail set, than to have problems later on.

So, for me, I will always go for a docked tail and erected ears Doberman. I don’t want to have a dog who gets injured after a year and goes through a lot of pain, and the vet recommending amputation.

What do you guys think about Doberman tail docking? Let me know in the comments section below, and don’t forget to share if you liked the post.

How To Care For a Docked Tail?