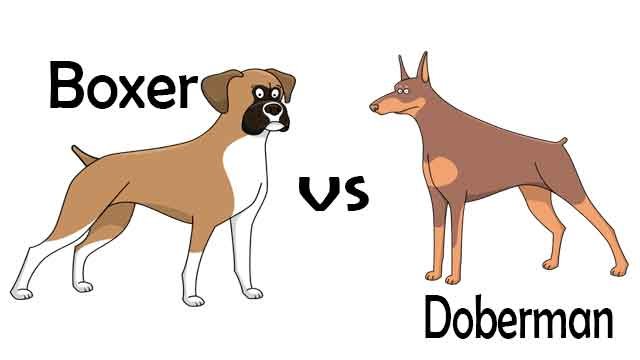 Are you really torn right between these two amazing dogs, whether to choose Boxer or Doberman? I’m going to explain the difference between Boxer vs Doberman. So at the end of this post, you should be able to choose one that suits you best.

I’m going to give you a rundown on the physical differences, temperamental differences, between these two amazing breeds of dogs. Besides physical, I will also explain their physical capabilities and intelligence. In the end, we’ll talk about which breed of dog is best for what type of owner, which is really going to shine a light on this whole subject. Let’s see physical differences between Boxers and Dobermans.

Physical Differences between Boxer vs Doberman

They’re both working dogs and both fairly impressive physically on their own. Let’s talk about the height of these dogs.

Color of Boxers vs Dobermans

Coat Differences of Boxer vs Doberman

Boxers and Dobermans both have lean muscular bodies with an impressively powerful look. They are very similar with broad, and deep chests.

The popularity of Boxer vs Doberman

The Doberman is the 18th most popular dog breed according to AKC breed registrations, whereas the boxers are 14th, both are very close, not a big difference out of 300 Dog Breeds.

Price of Doberman vs Boxer Dog

Physical Capabilities of Boxer vs Doberman

Dobermans and Boxers both are incredibly impressive with their abilities.

The temperament of Boxer vs Doberman

Now, this is the most important difference between these two dog breeds. Talking about their temperament is very hard for me also, because there are a lot of similarities between these dogs.

Both breeds are great with kids and good with other dogs. Both are very owner-focused and loyal dogs, that’s probably the most attractive aspect of any dog breed.

Maturity Level of Boxers vs Dobermans

This is a big difference between the two breeds.

They’re both easy to train dogs as far as intelligence goes.

What Boxers and Dobermans Are Bred For?

The boxer was bred to hunt bears, wild boars, and deers. Hunting dogs still have some great qualities that we love, like, trainability. And, they need to be able to react to their owner’s requests.

The big question is, which one of these two breeds should you get? They’re very similar in a lot of ways but there are some incredibly important differences that could determine which owner is right for them. This is a hard question. It’s like asking you which brand of car is best. Everybody has an opinion and it’s very subjective.

1 thought on “Boxer vs Doberman – Which Is Better”