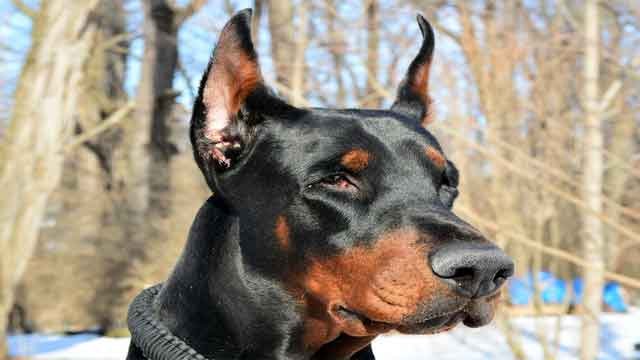 Mighty and majestic, Sleek and powerful, fearless and vigilant, the European Dobermans are the world’s finest protection dogs. Doberman is the world’s first dog, bred specifically for personal protection.

The Doberman is bred as a personal protection dog, and he feels his job in life is to stick like glue to you, and no one’s going to be out to get you. When you get up to go to the bathroom, he follows you right in there, and he won’t leave you alone. If you have a working dog with protection instincts, “that’s what they are bred for”. They’re stable, and they’re a good family dog for right owners that we will discuss in ideal owners.

Now, Western Europeans bred Doberman pinscher dogs, part of the breeding program is to keep the essence of the breed. In other words, the reason for the Doberman being is a personal protection dog. So when they breed dogs, for instance, in Germany, they follow a certain standard as far as beauty goes. They do a temperament test which includes social things, being around people, crowds, but also having a simulated attack and the dog must defend you.

The European dogs, you can’t lump it all in one basket because Europe is a bunch of countries and each country can have its regulations. In general, the countries in Western Europe, the EU countries, for years, have had rules and regulations on breeding. They have certain breed tests that dog must pass before it’s allowed to bred. As I was saying earlier, they must pass for confirmation. For beauty, they must be graded very well or excellent. For the temperament, again, very good or excellent, and certain health tests done.

So that means if you want to import a puppy from Germany when it arrives here, it’s going to have long ears and a long tail. Unfortunately, the new USDA regulations prohibit importers from importing a dog under four months old because they want it to have the rabies shot. So at four months old, it’s too old when it gets here for you to crop and dock it. So it’s going to remain sort of a black and tan Coonhound, long ears and long tail.

However, Eastern Bloc countries like Serbia, they’re still allowed to crop. So they’re capitalizing on that. To produce type, in the past, there has been some line breeding and inbreeding. So every breed has certain things you want to look out for.

Today’s Dobermans are natural guardians, which means they do not need any kind of specific training to make magnificent protection dogs for people and properties they have. That inherent predisposition to defend their own, which includes their owners, their territory, as well as other pets living in the household. And, whilst Dobermans are usually pretty friendly, reserved towards people in general.

They do form extraordinarily close connections to their own family and in particular, they will bond with the one person in the household who they regard as their leader. This close emotional connection gives us a clue as to why these dogs make such amazing natural guardians. Their deep affection for their loved ones gives rise to fierce loyalty. And, this loyalty in turn motivates the dog to defend their people with everything that they have.

However, you do have to understand how the dog thinks. For example, Uncle Joe who hasn’t seen you in five years comes to visit, and he sneaks up behind you and grabs you in a bear hug, and your dog is there, probably not a good idea. The dog sees someone attacking his master. He’s going to come to your defense. Coming up and slapping someone on the back is not a good idea also.

IPO Is a Temperament Test

There is a sport, and it is called Schutzhund. Schutzhund started as a temperament test, and it’s involved in a sport. It’s now called IPO, but it tests all the major drives of the dog. The dog has to track a human. And IPO tests his concentration, sense of smell, sense of obedience to follow the track, and just going on, and sticking with the job. The obedience portion tests his agility, his ability to follow the command, his rapport with the owner, retrieving, working from a distance under command, etc.

The protection aspect tests the dog’s courage, and hardness, willingness to take on the bad guy even if it means putting himself in harm’s way to protect his owner. Also, he’s under the control of the owner and willing to follow the command. Even when he wants to get that bad guy, and you tell him, “Out,” he must out because he’s got to be under command. So it tests all the major drives of the dog.

Breeders, way back when in the early 1900s figured this was a really good test to find good breeding partners. Again, Of course, with all this work, they got little competitions going. The interesting fact about it is that if you talk to a German shepherd dog person, they will say that Schutzhund developed as a breeding test for the German shepherd dog. However, what they don’t know, and it was, the German Shepherd Club was the first club that said, “Wow, this is great, “let’s incorporate this into our breeding program.” However, Schutzhund was developed by a German gentleman called Konrad Most, and he was a Doberman breeder.

Today dog enthusiasts all over the world adore the European Doberman, and not only because of its amazingly strong protective instincts. But, also because Dobermans are a sheer joy to live with, usually very calm and quiet in a home environment, these dogs are so attached to their people that many people call them Velcro dogs. When exercised enough the noble protectors can even be kept in apartments.

They absolutely love nothing more than snuggling up to their people and just following them around the house wherever they go. Hence, these same features make the Doberman also very prone to separation anxiety. Especially, when sharing the home with their owners.

It can be observed that Dobermans display anxious behavior like weeing on the floor, or whining, or scratching at the door as soon as their favorite human leaves the home. Now, this tendency can be counteracted by having other family members take over some of the care of the dog. Like feeding, walking, and training them as well. In this way, the intelligent Doberman will quickly learn that their main canine leader leaving the home is nothing to be upset about.

Dobermans make excellent family companions and guardians. They adore children and usually get along quite well with other pets in the household, especially, if they grow up with them and are well socialized. Now, of course, as is the case, with any large breed, you should never leave your dog and your young kids to play together unattended. Dobermans are large dogs and quite playful, and can accidentally knock children over causing quite severe harm even if it’s a complete accident.

A reputable breeder of Dobermans should test eyes, hips, thyroid, Von Willebrands, cardio, and other health tests before breeding.

We’re lucky out on the Von Willebrands because they found the gene responsible. So you can do this little cheek swab in your dog and find out if it’s affected, a carrier of this gene, or clear. By having that knowledge, in a couple of generations, you can breed the dogs clear. Von Willebrands is a type of bleeding disorder, not as serious as hemophilia, but there’s a clotting problem. So you don’t want to have a dog with a bleeding disorder. However, the genetic testing we can do now is going to alleviate that problem.

They’re currently doing a lot of research and trying to find genes that cause cardio. So far, they found two, but it doesn’t seem to be the answer yet, because clear dogs are still having a problem. So it has to be multifaceted and maybe even an environmental influence, but they don’t know. So what breeders do now is, test their breeding stock with echocardiograms or Holters which is like an EKG machine that finds if they’re throwing any extra ventricular beats or whatever. They’re testing these two gens, and hopefully one day they’ll have a handle on that. 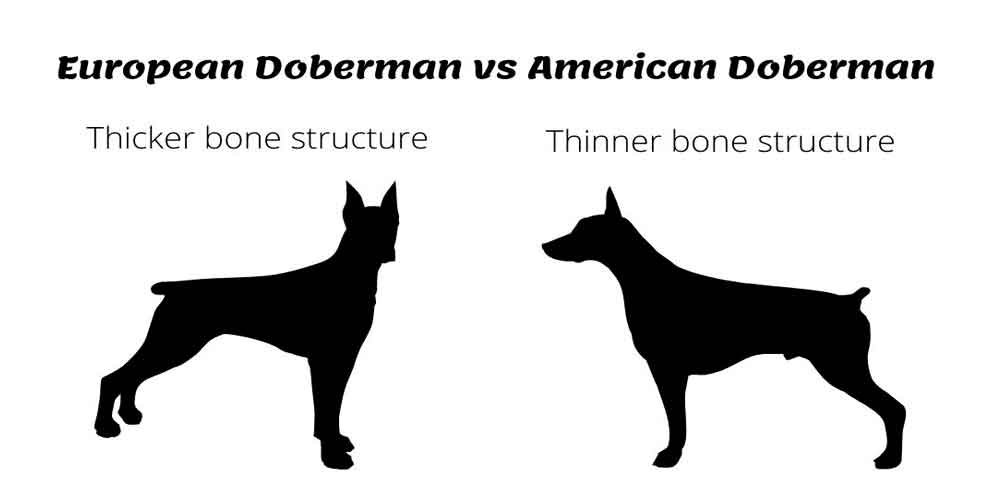 What to Look For When Buying European Doberman?

Some breeders, in the United States, are 100%, European breeders. They tend to breed more for the look if their dogs don’t have any working titles and extensive screening. A lot of people get dead spin on the fact that their selling point is well, this dog right here is the great-grandson of a dog, which is a great dog having personal protection, or show title. But that’s three generations, two or three generations back.

So we can’t go by great grandfather, we go by what the parents are, what they look like. That’s why when people ask me how to pick out puppies? I say “Go see both parents” just don’t get caught up in seeing what the great grandfather looks like. Because I’ve seen a lot of times where the puppies actually come out looking like the mom.

If you are a person into the sport, whether it’s French Ring, PSA, IPO, or personal protection, you have to be able to look for dogs that have workability. See both parents work, because it’s in their DNA. Either a dog going to have it or he isn’t going to have it. He is either going to ball or fall. One or the other, right?

But we’re in America and it’s all about image first. It’s all about what the dog looks like. A lot of people buy animals off of pictures. You take the right picture at the right angle, that dog going to look big. He’s going to look great. They got Photoshop for a reason.

How many inches tall is a 10 week old European Doberman puppy?

At the age of 10 weeks, European Doberman puppies should measure between 12-14, or 15 inches. But, it depends on every individual puppy.

How much should 7 weeks old Doberman European weigh?

What is the difference between European and American Doberman?

There are a lot of differences between American and European Dobermans. I’m considering 2 main differences that are size and temperament.

How big would a European Doberman pinscher get?

Some European Dobermans can get 29-29 ½ inches tall, but normally they stand 28-29 inches.

Now, if you have more questions about Dobermans, visit our FAQS page. or just send me an email and I’ll be in touch soon.

If you enjoyed reading about European Dobermans, do share with the people who love Dobermans. and, don’t forget to give your valuable feedback because it motivates me to share more valuable information about our loyal dobermans.