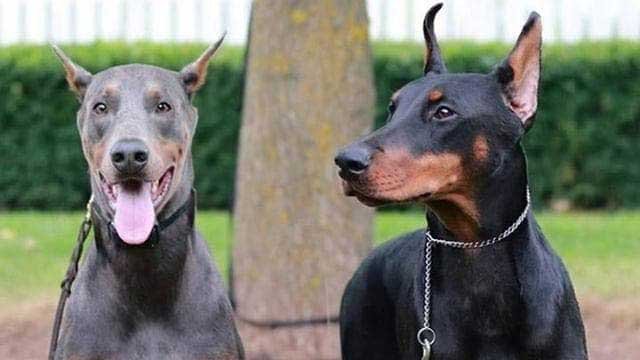 Somewhere between eight and fifteen percent, that’s the current estimate for about how many Dobermans in this world are blue Dobermans, not terribly common but they are great-looking dogs.

So, being that they’re one of the standard four colors in the US, that means the blue Doberman can compete in conformation shows and all the other standard competitions that the AKC puts on.

So, how does the blue Doberman even exist? Well, actually these blue Dobermans were genetically set up to standard black and rust-colored Doberman, the only difference with these dogs is that their parents had a recessive color dilution gene. And, what this dilution gene did was kind of dilute that pigmentation that would have otherwise gone into the black coats. So, the dog came out with less pigmentation and it wasn’t a solid black dog anymore. As Now this grey or silver kind of look to the fur. And, these dogs will also typically have bluish-grey lavender or flesh-colored noses, lips, and iris along with all the standard rust-colored markings that any other Doberman has.

One little side note: if you’ve ever heard of the fawn or Isabella colored Doberman, those dogs were actually meant to be the red Dobermans except their parents have the color dilution gene so it created more of a fawn color to their codes.

Visit this website dreamdog.in if you want to read about more dog breeds

I reached out to a lot of owners of the blue Doberman to gather some data about what those owners are paying for their dogs. And, on average, people were spending between four hundred to eight hundred dollars on their blue Doberman puppies. Now, the blue Doberman price is far from the normal price point for a purebred Doberman in the United States which is somewhere around $1500 to $2,500.

There are some breeders out there, reputable ones, who will charge the same price as any other Dobermans or fifteen to twenty-five dollars for their blues. But, it’s generally considered to be a sign of a less reputable breeder if they attempt to sell the dogs for an inflated price claiming that they’re in high demand or very rare.

How rare are these dogs? Well, as I mentioned earlier, the Doberman Pinscher Club of America estimates that 8 to 15 percent of Doberman’s are the blue Doberman’s and really this is just an estimate, they don’t know the exact numbers. So, are they rare? Well, I guess that depends on your perspective. Personally, I consider the blue Doberman’s to be rare.

In the past, these dogs were heavily discouraged from breeding because a lot of the old Doberman pros would see these dogs as a mutated version of the Doberman and not fit for reproduction. There’s a lot of people that still feel that way, and, that’s why you’ll see these dogs going for a lot cheaper prices than their black or red counterparts. They sure seem to be a lot more accepted in recent years after all the part of the standard colors in the United States. Now and on occasion you’ll even see them showing up in the show ring but a lot of the diehards out there will say that you should never go to a blue or less common color.

I disagree with these pros that say you need to avoid breeders who specialize in less common colors of the Doberman.

Rare blue Doberman dogs have all the same health concerns that any other Doberman will have, plus a few extras that mainly have to do with their hair. Their hairs are brittle and tend to break more often. They’re a little bit more prone to ingrown hairs and staph infections.

The biggest health concern of the blue Doberman is a condition called color dilution, alopecia, or CDA, it’s also often just called blue Doberman syndrome. This doesn’t affect all blue Dobermans, but it is extremely common with them. The Doberman pincher club America estimates that anywhere between 50 to 90% of all blue Dobermans will develop CDA at some point in their lifetime. So, this does make them the most likely of the four standard Doberman colors to develop this condition and it can be anywhere from a really mild case to a pretty severe case.

We know this condition is really common with the blue Dobermans, but what is it? Well, CDA isn’t fully understood but we know it affects the hair follicles on the dog’s coat and it leads to an abnormal distribution of melatonin into the hairs as they grow. And, this causes the hairs to be a lot more brittle than normal and they tend to break easier and it can lead to just an overall thinning effect of the dog’s coat or patchy hair loss. And, it can also cause other things such as dry flaky skin, these little red bumps that kind of look like acne. It can cause bacterial infections on the skin, especially the dog scratching at it can make them more prone to sunburns. Generally, the hair loss that results from this is permanent but it doesn’t affect the overall health of the dog.

Dobermans that will develop this condition aren’t really born with it they come out looking pretty normal and their coats look great. They’ll generally start to show symptoms between around six months of age to three years of age, and the earlier that they show these symptoms, the worse the case will be.

There are different colors of blues, some are light color blues and the darker colored ones. The darker colored blue Doberman’s are less likely to develop CDA than the lighter blue colors are.

Now, as far as treatment goes for this, there is no cure for it and the hair loss is considered permanent but there is some recent data to suggest that melatonin supplementation might help to reverse some of this hair loss. And, also it’s believed that supplementing with some essential fatty acids some vitamin A supplements, or even just making sure they have a nutritional diet will help to prevent this condition from developing in the first place. But, your vet will recommend some specialized shampoos and point mints and maybe some changes to their diet. if your dog is diagnosed with this so basically these dogs are just like any other Dobermans out there, really you just need to pay a little more attention to the nutritional needs, their skin, their hair, and maybe keep an eye out for some of the signs of CDA.

And, I know I spent a lot of time talking about color dilution alopecia because it’s one of the biggest concerns of these blue Dobermans, yeah it just really needed to be addressed, but it’s worth mentioning or reiterating that these dogs don’t always get this.

If you have a blue Doberman doesn’t mean you’re for certain going to get these conditions. They’re great-loving dogs just like any other Doberman.

No, they have the same temperament as their purebred counterparts.