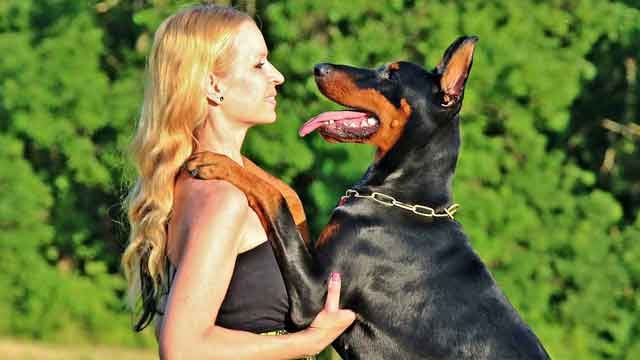 Owning a Doberman isn’t all just cool poses and dramatic shots in slow motion. There are some actual realities to the situation, the truth of the matter is Dobermans can be beautiful amazing unique dogs, the dog that you’ll talk about for the rest of your life until the day you die, or they can be kind of a terror if they don’t get what they need.

So, in this article, I’m going to help you to make sure that you give your Doberman everything they need.

They Need A Task To Accomplish

They need a task to accomplish, these are working dogs, so they need to feel like they’ve accomplished something throughout the day. This can be simple, you don’t have to get too complicated with it.

They need lots of human interaction. Dobermans are protection dogs from the beginning, so they’re super focused on their humans, it’s just one thing that’s ingrained with them. And, they need lots of interaction from you talking with you, back and forth. And, if you don’t give them that interaction, they’re not going to learn the behaviors that are acceptable in the household. And, if they are not feeling fulfilled, satisfied, and happy. Trust me, you as the owner not going to be happy either.

They need regular guidance. Now, kind of like that interaction, I mentioned in task accomplishment. This goes a little bit further, they need a lot of feedback on what they’re doing throughout the day. They want to know that they’re doing right by their owners, and if not, they need to have that direction.

A lot of people ask me how I train my Dobermans to ignore kid toys in the house. And, just they go straight to their toy, even if it’s in the middle of all my toddlers’ toys all around it.

Well, the way I train my pinschers simply is by just giving them feedback throughout the day. That’s one of the beautiful things about the Doberman breed, they want to please you. So, really all they need is that constant feedback, if they go towards their bone we will say “yes, good boy, good job” and reward them.

If they go towards a kid’s toy, say “leave it, no” little firm voice, a different tone. You give this feedback all day long, sooner or later, they’re going to get pretty well dialed in all on their own, because of their instincts to clean their owners. And, you’ll notice them ignoring your kids’ toys and going right to what they should be chewing on. It’ll make your life easier and their life a whole lot happier

They just need plenty of attention, I mean plenty. As much as you can dish out throughout the day. They need to follow you around the house. They need to follow you into the bathroom, if you’re watching TV, they kind of need to be right in your face, and it’s just how they are. And, if you can give them this attention, in fact, if you thrive on this attention then you’re going to be a lot happier.

They need consistent exercise every single day, at least one to two hours of exercise every day. This could be a huge commitment on your part and you really got to make sure it’s something that you’re willing to do or even more than that able to do with your schedule.

Now, when people hear that they get really scared, sometimes they go for one to two hours every day. Well, it’s not like you got to go on a two-hour walk every single day. I’m saying the total of all the exercises throughout the day.

Now, there are different lines and lineages of Dobermans, some require a lot more than that some even less than that. But, the important thing is that you know that they just need this extra exercise. It keeps them mentally and physically happy. They’ll be a lot more relaxed throughout the day, and if you’re getting some behavior problems like destruction in the house, whining, crying, aggression, and howling, it is because they may not be getting the stimulation, the exercise that they need.

They need lots and lots of mental stimulation. Doberman dog breed is the 5th  smartest dog breed in the world, and they have so much brainpower that they got to let it out otherwise, they start to go a little stir crazy.

Puzzle toys are an absolute blessing to the Doberman breed. Puzzle toys are a great way, those are toys where you usually manipulate it a certain way and it lets out a treat for them.

Playing new games with them, interacting with them, training sessions that involve new commands, or reinforcing old ones can help too. All these things can really help engage their brain. And, if you don’t engage the brain and get out all that extra mental energy, then you’ll be paying for it other ways because they’re going to put that mental energy into something else and usually it’s getting in trouble.

The Breed needs lots of consistency and routine. Consistency is amazing for training and it really helps them to know what to expect from you, and it helps make training so much easier. Routine is great because if you’re looking for a task to complete, you know Doberman needs a job to do and to complete, a great way to fulfill that is just to have a routine every day.

If you have a routine of getting through a walk and then a series of training commands after that, your dog can start to feel like a job that they’ve accomplished. So, use that routine to your advantage to help keep them extra happy. It also helps with making them feel a little more secure especially with young puppies in new homes.

If you have a consistent routine every day it helps them get more confident in their new home. It has a lot of benefits for the Doberman and other breeds as well. So, keep that consistency and that routine and you’ll keep a happy Doberman.

Dobermans are pack dogs and they certainly like to be a part of their family. And, the more you include them in family activities, the more fulfilled they’re going to be. Not to mention it also gets them extra exposure and extra socializing, but it helps them to bond tighter with the family which will make your life so much easier because they’re going to be happier and more content.

it could be simple things like bringing them to your kids, baseball game, or bringing them to a family outing with a lot of extended families, or a kid’s birthday party and having them right in the thick of it as long as your Doberman is relaxed and confident in that situation.

It could be so many different things, just include them in family activities and resist the urge to keep them separate.

I did have some struggles with my new Doberman, Covid-19 hit right about the time that we got him. So, I had a lot of struggles with socialization with him and still working through that but it’s certainly an uphill battle but the more you continue to re-to-do it as they age, and as time goes on the more well-rounded the dog is going to be in any situation. and, you want a calm, steadfast great example of the breed because after all you’re a Doberman breed ambassador, right?

People don’t get to meet a lot of pinschers so yours might be the only one they see. So, keep them well socialized.

Real talk… you’ve got to be honest with yourself. if you’re able to give a Doberman what they need to be happy and feel fulfilled in their life. So, they have low anxiety if not you’re going to have a pent-up dog that has just tons of energy.

if you don’t give your dog what they need and a way to get out the energy that they need to, then you’re just going to be paying for it with a lot of destructive behaviors.

Some examples of this are:

So, have a serious talk with yourself if you’re considering these dogs. Make sure you can fulfill these things for them. if you can, then I say get yourself a Doberman, because you’re not going to regret it. They pay you back extreme dividends.

For those of you reading, have owned a Doberman, what advice would you give to other people you wish you had before you got your first Doberman? Please leave in the comments below, you might be helping out someone new who’s reading this article because they’re considering getting one of these amazing dogs. Keep being great Doberman pinscher dog breed ambassadors