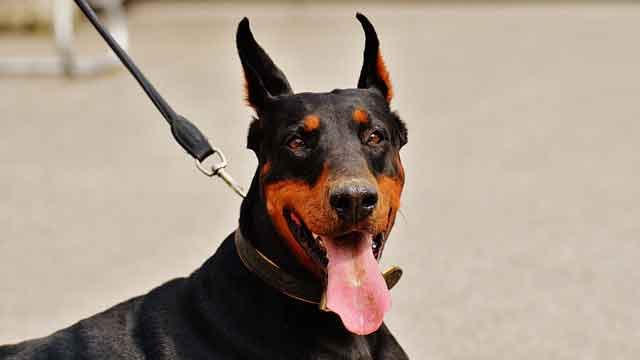 Many potential Doberman owners are afraid to get the first Doberman or worse they just give up when they start because they have a million questions. And, they’ve heard horror stories online about how difficult is to own a Doberman dog.

I collected a list of the most frequently asked questions by new Doberman owners. My hope is if I run through these and answer those questions. So, you won’t be afraid to get your first Doberman.

Are Doberman aggressive with kids?

The Dobies are excellent with kids. Now, they do have a tendency to bond strongly with one person in the house and usually, that’s one of the kids but they’re loving, gentle, sweet dogs. And, if they’ve grown up with a kid especially, they’ll do great. Just remember lots of socialization and keep exposing with children along the way.

Are Doberman aggressive with other dogs?

How are they with other dogs in general?

They’re great especially with dogs of the opposite sex. Now, like most dog breeds, if you get them in a house with a dog of the same sex especially if they’re both males, you can sometimes have issues. But in general, having another dog in the house is actually a really good thing for them because they need a lot of exercises and that can help make get that exercise a whole lot easier. The Doberman pinscher is an awesome breed and they’re great family dogs. I really don’t think you’ll be disappointed.

Are Doberman aggressive with same-sex?

The male and male aggression with Dobermans was generally thought to be the big issue. Some recent research has shown that females and females can be an even bigger issue at times with the Doberman breed. So, same-sex can be a problem. Now, with males, it seems like they get in small little disagreements and fights a lot and it tends to be less serious.

Whereas females get in less scrabble squabbles, but they tend to be more serious and lead to injuries more often, that’s what I’ve seen from talking to other owners. There are some things you can do to help this.

So if you get them socialized with a new dog in that critical window between four weeks of age and 16 weeks of age, then your chances of succeeding and having a smooth household with the two dogs living together are a lot higher. But, always feed them separately because resource guardians can be an issue as well.

Do they get aggressive in apartments?

No, they don’t. They’re called Velcro dogs for a reason. They love being right with their owners and right on top of them and they’re smart enough and intelligent enough to know what’s expected of them. So, you can train them to work really well in a small area. The only issue could be exercise so, make sure you put a little extra effort into getting them out and getting them their daily exercise and they can do great in their apartment.

Does playing tug of war leads to aggression?

It builds confidence in Dobermans, not aggression. But, here’s where it can be an issue, if your dog is already let’s say jockeying for a position in the household, maybe they’re under one year of age when they’re in that phase where they’re trying to figure out where their pecking order in the house. And you already maybe have a dominant dog and you’re playing lots of tug of war with them.

And maybe they’re beating you all the time, you’re letting them win all the time that could really build their confidence up and lead to a dominance issue. And dominance issues can lead to aggression and that’s where people can get into trouble with that, but remember, it builds confidence.

So it can be a good thing too if you happen to have a Doberman that’s a little bit on a timid side needs some reassurance all the time. A little bit scared in different situations and you do need to build that confidence. Then the tug of war can actually be a good thing but that’s usually not the issue with Dobermans. Dobermans tend to not have a problem with lack of confidence so that’s why in general I usually recommend steering clear of tug-of-war or at least if you do it, make sure you usually win unless of course, you’re trying to build confidence in an otherwise timid dog.

Before you take off, drop a comment down below and share your feedback about the post. If you want more, let me know any questions you have about the Doberman breed and I’ll do my best to answer all of them.

2 thoughts on “Are Doberman aggressive? Here’s The Honest Answer”